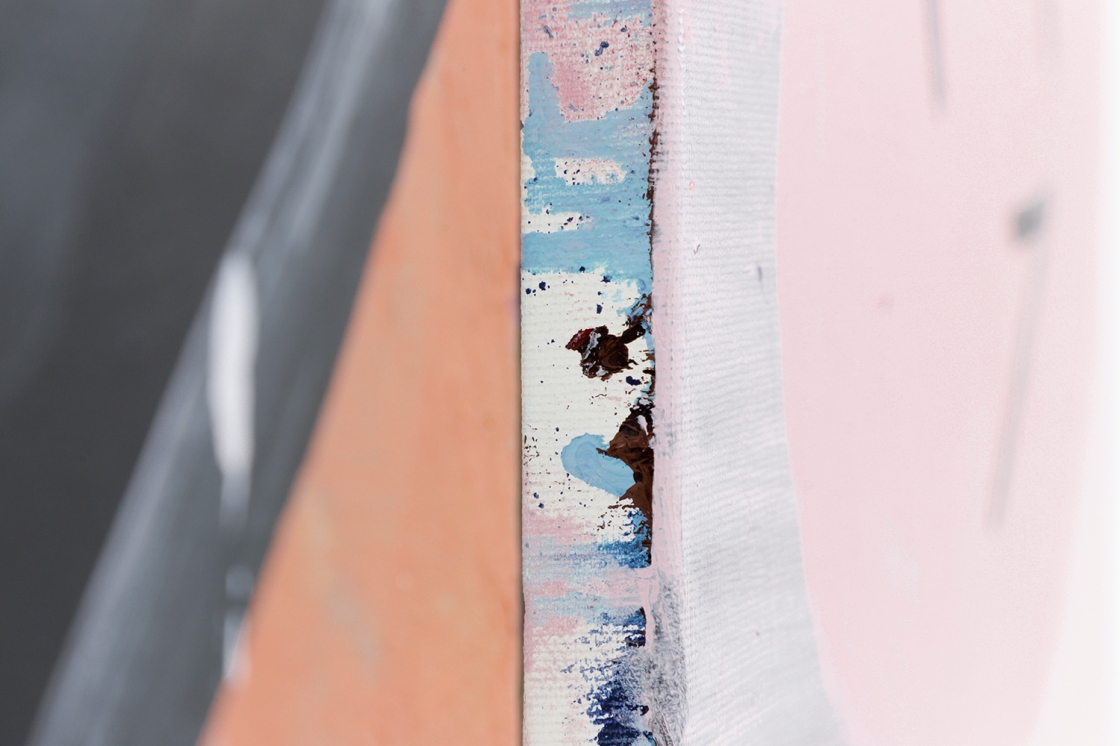 Simon Kocjančič is an artist of multiple art fields – he works in the mediums of printmaking and drawing, but also has a liking for the underground world of art fanzines. However, his work remains exciting and very compelling in his primary medium, painting, in which he has created the works for the present exhibition project YO YO. This is only a sample of his extensive production of paintings, mainly in the techniques of oil and acrylic on canvas, which the artist conceived intensively in the long year 2020 and will continue to do so this year. It is a period that the artist has defined as full of contradictions, often reflecting an unbearable new social reality saturated with political and economic tensions. Uncertainty and unease have thus also entered the visual universe of the introspective painter, who in the past has often explored his own individual experiences and personal poetics, this time with additions of colour and motif schemes that contain either expressive or veiled elements of humour, criticism, anger and despair.

In his painterly technique, he avoids routine and painting from models, preferring the spontaneous stroke whose aim is to produce a different, perhaps unexpected, result, taking care to keep his pictorial language fresh, both in terms of motif and colour contrast. He avoids primary colours, preferring to mix his paints, resulting in striking hues that are at once soft and cool, with soothing shades, such as blues or pleasant pinks with occasional intrusions of dramatic black. Such elements of surprise are in keeping with the artist’s usual approach to the medium: he focuses not on classical composition and its balance, but on the ways in which he throws the viewer off track and evokes possible feelings of unease. Kocjančič relentlessly experiments with gesture, colour and the promise of a momentary emotional experience.

The artist builds his artistic profile on a premise that sits at the intersection of figuration and abstraction, with only semi-recognisable motifs. His paintings are full of seemingly incoherent, stylised and non-mimetic strokes, but they are not entirely abstract, leaving the question of their meaning to the viewer. In terms of subject and motif, the artist’s personal world comes to the fore, not only his memories, but also the current and distant events from his life, as well as real objects from the world around him. In this way, he establishes personal mythologies, a kind of catalogue of symbols that focuses on a personal experience that, at least at first glance, is not explicitly and clearly socially or politically engaged. Yet his canvas acts as a diary of thought, indicating a turn outward. In the year when the general cessation of public life confined people to the intimacy of their own homes, Kocjančič looks critically at the world. What lies between the – at least apparently – clearly defined boundaries as we cross a certain boundary? He is attracted by the world of opposites, be it the nuances of colour, the indeterminacy of motifs and their content, the boundary between the personal and the social, the boundary between the inner and the outer world, the boundary between abstraction and figuration. He is not concerned, then, with the extremes of one direction or the other, but with the interspaces caught between the two opposites. In the reflections on display he, on the one hand, deepens the conversation with himself and his art, and, on the other, enters into a conversation with the outside world, taking on an extremely courageous and optimistic stance.