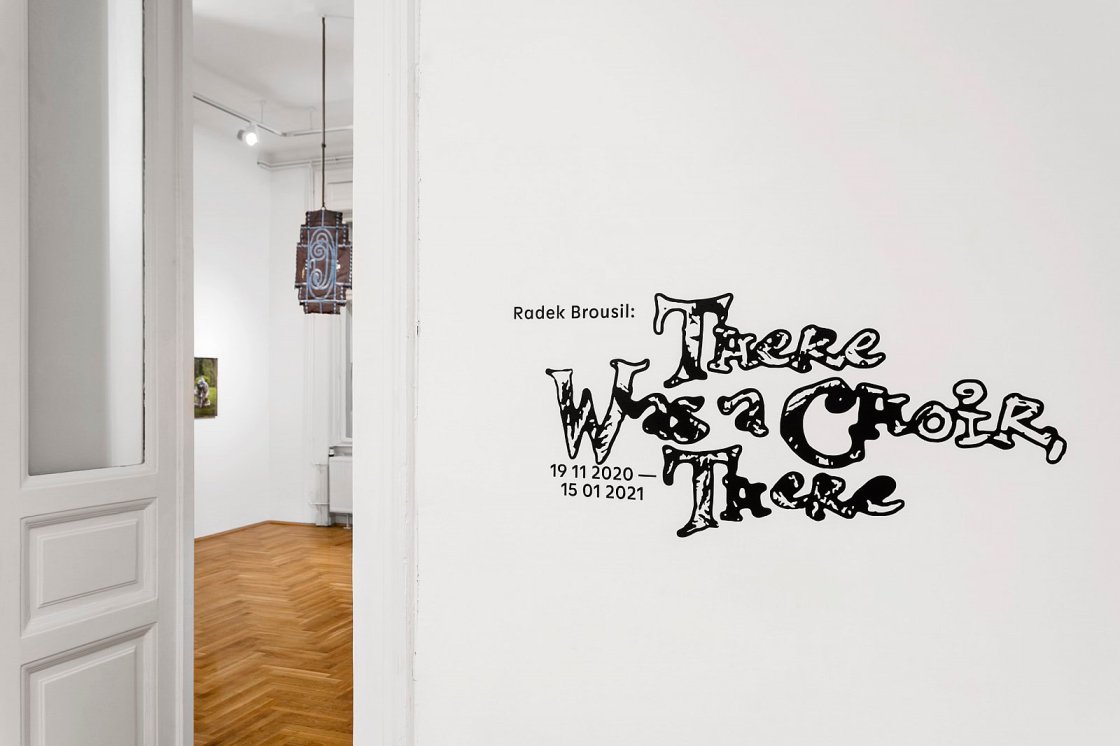 Title: There was a choir, there

“I dont know if anything at all will be alright.”

The main hero of Radek Brousil’s film is in a mental dialogue with a female hyperobject, discussing ’the end’, shame, guilt and the possibility of doing anything while wandering through the city and the country in a half-dead fish costume. Skateboarding, smoking cigarettes, wondering about “feeling the butterflies” in long, distancing shots, something like a reference to the melancholic romance of independent cult movies of the 90’s. The authenticity of intimate experience is, however, constantly alienated by the overall theatricality of the costumes, props, overplay, cut-ins and the ever-present shadows of a real catastrophe. The intentionally unresolved ambivalence of intimate and real-life drama can, therefore, be read as an appeal for resolution. Textile objects and staged film photographs further problematise the malleability of the seemingly contradictory linking of activism and escapism. A critical reading of Czech culture and history mingles with personal sentiment for the landscapes of our childhood.
The exhibition There Was a Choir, There is, therefore, a mutual bond of the personal and the general, ecological topics evolved in Brousil’s previous work, personal predispositions and memories. The bonding agents in this assemblage are often intentionally contradictory emotions. The motif of the half-dead fish represented by the main male hero (the alter-ego to a certain extent) literally refers to the trace of the amount of drugs splashed into the rivers from our sewer system. The costumes also resemble the animated character, the 3D video-rendered crying and heavily breathing plastic bottle and ceramics featured in Brousil’s earlier works (such as “Too Proud to Hope, Too Weak to Climb”, 2018), poetically referring to the meaninglessness and the catastrophic consequences of the bottled water economy. The entire film’s dialogues are put together as a collage from the lyrics of 90’s indie-emo bands. As they form part of his memories and identity,
Brousil already used those band’s t-shirts to create the giant water drop in ”Too Proud to Hope, Too Weak to Climb” in 2018, or the embracing torsos in ”Standing, Holding a Waterlily” in 2019, and these bands also provide the musical background for many of his videos. Love, self-harm, suicide, pain and anxiety are in the script dialogues ambivalently thematized as an individual story and the common fate of the planet. In the only song of the film, Brousil himself sings “I’ll try, I’ll try, I’ll try” underlining the tension between the authentic feeling of the impossibility of an authentic position, anxiety and powerlessness.

The main characters’ make-up is an allusion to the clown-like make-up of Jiří Voskovec and Jan Werich, the 1920’s and 30’s creators of Prague’s avantgard Liberated Theatre, as well as to their own inspiration drawn from the Asian exoticism of their time. The tension between a concrete utopia and fairy tale present in the “poetism” approach of Liberated Theatre the tension between local context and global phenomena, further associated by the film’s locations. Whether it be the functionalist Church of the Czechoslovak Hussite Church in Farská street in Prague’s 7th district with its renowned stained glass cupola, or The Devil’s Heads, a pair of 9-metre-high rock sculptures near Kokořín made by the sculptor Václav Levý between 1841-1846, they are a direct reference to Czech Romanticism, folklore and the fairy-tales tradition the film intentionally enters. The 1990’s movies’ romantic skateboardingmelancholy is at the same time an authentic return to Brousil’s childhood, the stigma of growing up in Prague’s suburbs of prefabricated panel housing estates.
As in Brousil’s previous work, an omnipresent ambivalence stands behind the film series of serious statements and decisions. The film was shot as a zero waste film. The costumes were upcycled from fabric leftovers by the designer Mia Jadrná. Brousil has himself been working with textiles and sewing for a while. He used Czech-made fabrics with patterns intended for the African market for example in “Hey Sorrow, Where Are You?” in 2018. He uses textiles generally as photo print material and sewing as a relation to his own positions to photography and his position as a male photographer. The pillow-like objects in the gallery are consequently shifting the subject matter of hard architectural elements, often stucco relief of faces – mascarons, to another level of intimacy and emotions: softness and hugging. His past and present as an artistic, as well as a commercial photographer is also reflected in the series of staged film photographs hanging on the wall in custom frames. There Was a Choir, There is like a kind of alter-ego, an image of a mind but also the effort to capture the general and the individual, the generational and the social feeling of authentic alienation.

Special thanks to Czech Centre and Association of Hungarian Photographers for their support!