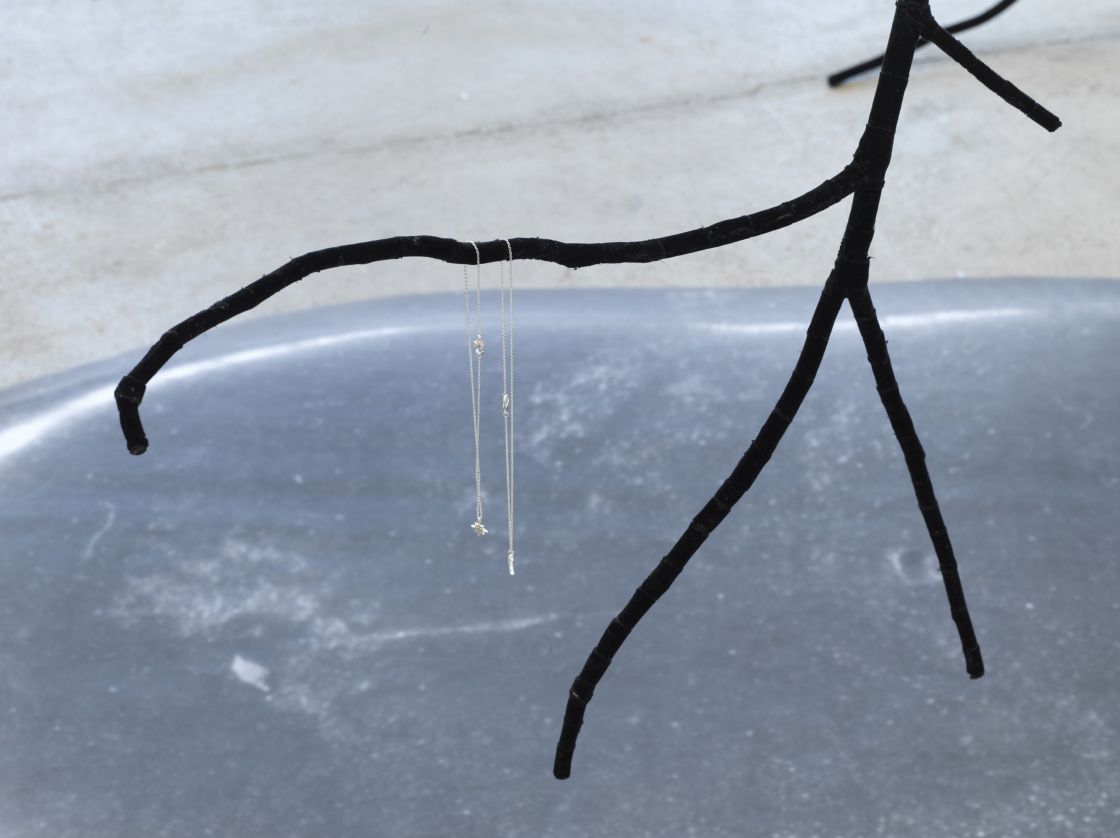 What sort of visual language should emerge when the eye is no longer in touch with the conditions of its contemporaneity — when the material surfaces of our everyday life appear too fast, increasingly eclectic, autonomous and whimsical?

The exhibition by artists Nika Kupyrova and Ekaterina Shapiro-Obermair pursues implicit textualities carried out on these surfaces. The normative aesthetic impressions of objects, their semiotic potential and possible historical context, are tied in a game of eclectic interweaving, where autonomous models of narrative construction and pragmatic use are established.

The works are set between the image and the object, occupying a liminal place where dimensionality becomes increasingly questionable. Nika Kupyrova’s flat objects, scanned pebbles — flattened, enlarged and with stretched perspectives — introduce a spatial puzzle: where to position ourselves so that the image before our eyes takes a form that will make the reference material recognisable? Is such a position even possible? Are we always too small, too big, too human for the image to appear as familiar and recognisable?

The fleeing gaze of these puzzles finds temporary pit-stops in the works of Ekaterina Shapiro-Obermair, with their symbols and graphic elements. But even here, an attentive observer quickly deduces that it does not involve unambiguous repetition: these works are full of minimal differences. Although our gaze can be fixed on them, temporarily finding its place, as soon as it does, it is already interrupted by disturbances which introduce it to a paradoxical temporality, where graphic symbolic forms are accompanied by barely noticable stains. These make the paper appear older than is actually is, or give the impression that the surface is missing a recently displaced object that can only be seen as a vague trace or spot in our own overexposed eye.

The questions that arise from the works of Kupyrova and Shapiro-Obermair thus concern a visual language which overtakes our perception and cognition, hence creating an image of the world that is almost identical to ours, but with certain minimal unusual differences, that are difficult to determine. The metal stands prove to be brittle and synthetic; the stone plastics turn out flat and spread out. The world reflected in the practices of the Otherwordly exhibition is not alien because it is digital, it is not a world of some unknown cultural context — from this perspective it is very familiar indeed — nor does it point to some metaphysical distance; this world is extremely material, relatable and almost understandable. The excitement triggered by this world stems precisely from this sense of proximity. And it is exactly here that it evades us.

Ekaterina Shapiro-Obermair (1980 in Moscow, Russia) studied painting and sculpture in Vienna at the Academy of Fine Arts and at the University of Applied Arts in Vienna, and in Nuremberg at the Academy of Fine Arts (1999–2009). She has lived and worked in Vienna since 2004. Currently she is a PhD student at the Academy of Fine Arts Vienna. Among other awards Ekaterina has received the Pollock-Krasner Foundation Grant (2014), New York. She has exhibited in international galleries, museums and institutions such as Georg Kargl Permanent, Vienna (2019), Museum of Western and Oriental Art, Odesa, Ukraine (2019), Jewish Museum, Vienna (2017, 2015), Ani Molnár Gallery, Budapest (2016), Ludwig Múzeum, Budapest (2014), Moscow Museum of Modern Art (2014), Croatian Association of Visual Artists (HDLU), Zagreb (2012), kunstbunker — forum für zeitgenössische kunst, Nuremberg (2011), and Secession, Vienna (2010).

Nika Kupyrova (1985 in Kyiv, Ukraine) grew up in Prague, studied at the Edinburgh College of Art, Iceland University of the Arts and the University of Applied Arts in Vienna. She currently finds her creative home in Vienna. Artistic presentations include participation in II and III Moscow International Biennale of Young Art and exhibitions in WIELS Contemporary Art Centre in Brussels (2018), Mattress Factory Museum of Contemporary Art in Pittsburgh, USA (2011), Wien Museum MUSA in Vienna (2018), SODA Gallery in Bratislava (2018), Kunstraum Niederoesterreich in Vienna (2015) and Meetfactory Centre for Contemporary Art Prague (2012). Nika is a recipient of Erste Bank ExtraVALUE Art Award (2017), a state scholarship for emerging artists STARTStipendium (2019) and is a collaborator of a media theory research project originalcopy.