The second chapter of the exhibition project “The white dot and the black cube”, curated by Anca Verona Mihuleț and Diana Marincu, aims to further explore the human/non-human tension which was at stake in the first part of the show called “The dark side of nature”. “I am the invisible man” wants to integrate the project in a new non-anthropocentric paradigm in order to discover the liminal perspective in which the semantic potential of the art show and the exhibited work is achieved irrespective of the human agent, by suspension and sublimation in white, invisible and inarticulate spaces.

The first part of the exhibition is meant to be a reaction to the ecologist paternalistic interpretations of nature and to some neoliberal pietist attitudes towards it, by shedding some light on the destructive potential of nature, to a possible component that reacts to man’s actions and interpretations.

Unfortunately, at least from reading the curatorial text and some of the artists’ works, another set of ideas transpires, which attests a rehashing of modernist practices and aesthetics, as well as the absence/presence concepts that were consecrated by the post-structuralists, which basically keeps the art show from reaching its true potential – one that is anchored into post-speculative, recuperating, reconstructivist and rational contemporaneity. Otherwise, the project rallies itself to similar contemporary post-Theory and post-postmodernist movements which oftentimes end up returning unapologetically to modernist conventions. 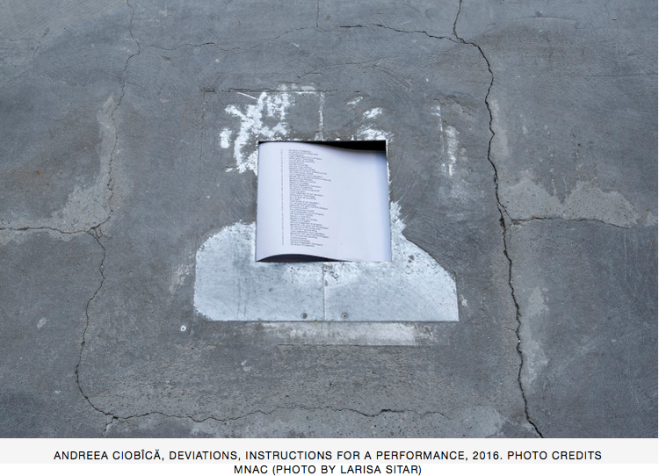 There is a series of key-concepts, repeated throughout the curatorial text, that is also put forward as interpretative paths of the works, which place this project uncomfortably close to a modernist melodrama: sublimation, matter destabilization, tension or artist-mediated epiphanies followed by rhetorical antinomic pairs such as interior-exterior, invisible-visible, symbolic-material, white space-black space, invisibility-visibility. Although it promises not to be a super ordering of the invisible over the visible, the curatorial discourse does not succeed in avoiding the layering of reality on two levels of interpretation, where one of the constituents of the antinomic pairs belongs to a an essential and poetic foreground, while the other belongs to a visible, derivative, secondary materiality insufficient into itself.

The art show refuses to admit the subversive potential of invisibility, offering instead a ritualizing and utopian experience for the participant – artist or visitor – while promoting the old-fashioned idea of the existence of a tension between appearance and essence, with the essence being forced to reveal itself via sublimation or even by canceling out the material. In “Prometheus as Performer: Towards a Post humanist Culture”, Ihab Hassan warns that the supernatural – in the form of any trans or meta material route is not a necessary condition in order to overcome anthropocentrism. The dematerialization of life and the conceptualization of existence are enough to generate a new type of epistemology and ontological positioning and implicitly a new type of aesthetics. Instead, the curatorial discourse discloses the resistance of a modern dream of overcoming material limits via sublimation and purification of the mater by destabilization or constrain. Destabilizing the material realm reifies an invisible, supernatural plane, thus exposing a discriminatory treatment of reality. The art show sometimes gives the impression that instead of a route that reconstitutes the invisible and the visible, it is after all a nullification of mater or a canceling out of its ontological significance. It’s no coincidence that works like “Ghost Cinema” (Cristian Rusu) hint at the Derridean trace, the mark of the absence of presence, unfulfilled spatial and temporal nonsense, the residue left behind by an excess of the visible, in other words, a presence. 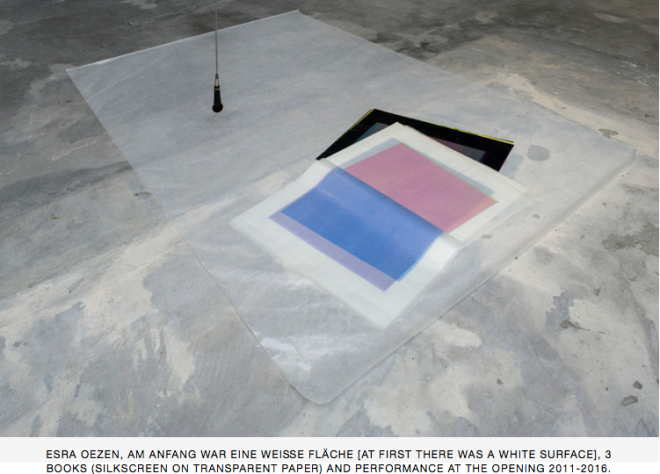 There is, however, a latent risk that the recomposing of materialily into immateriality could be realized into a constructivism reduced to sacredness and sacrality, to the hidden level, undiscovered and unseen, that safe haven for all Romanian exhibitions that reclaim Eliade’s mysticism and traditional-orthodox sensibility in order to convey themselves some kind of substance.

In Cătalin Ilie’s work, “I talked to the Wall and the Wall Was Impressed”, Diana Marincu identifies an inherent tension of strained mater due to an “impossibility of self-definition and legitimacy”. The curator goes on to reference Rothko’s chapel as a work that has a similar approach – arresting the moment of climactic tension within which the invisible can be categorized. But matter in itself, just like the materiality of things, does not succumb to this semiotic impulse of anthropocentric reconstruction. The tension between two levels of interpreting reality, if it exists, represent just one pattern of interpretation much indebted to modernist aesthetic theory. This tension springs from a lack of man’s adequate appropriation to objects and not due to a shortage of the contemplated object. An object that is deliberately placed in a gallery, forced to reveal itself and awaiting interpretation.

The recuperation of the visible through the extension and amplification induced by the conceptualization of invisibility is a praiseworthy initiative of the exhibition project. Faulty are, in this sense, the ideas of sublimating and intensifying the material and visible realm that does not require, anymore, a man who is invisible, but rather a man who wants to ameliorate reality using quasi-religious reveries and sublimated experiences. This way, the work “Present” by Michele Bressan, which produces an expansion of time by inserting an imaginary day into the course of a year, does not claim to be a complete potential exit from reality. Therefore we find a nascent disjuction between Bressan’s work and the curatorial project.

Neither the visible nor the invisible pose a wielding potential of escaping reality or resisting its constraining capacity. Invisibility is in no way something irrational or peripheral but rather another type of anthropocentric positioning. The fact that invisibility is not in the immediate vicinity of perception, or the fact that it doesn’t always incarnate itself into a decodable, expressible and eventful system does not supress its manipulative potential over reality. “Modern man needs to forget about the visible/invisible frontier in order to transgress the limits of everyday life” says one of the curators. Here we have a kind of self-hate, self-blame for an imaginary ontological impotence of a version of man that is insufficiently sensitive towards the immaterial or the diaphanous and liberating invisible. The self-flagellation of the human with such ideas is dangerously rooted in a politically correct rhetoric. The contemporary man is not insensitive to the invisible, which is responsible in a way for his discontented condition. Networking, clouding and the capitalist circulation of goods are already floating and diaphanous stances of immateriality but they do not constitute in any way an uplifting or emancipating reality. The uneventful discreetly but subversively inserts itself into man’s immediate reality. And exiting this dead end is not made possible via an epidermal transcendence of limitations or objects that surround the human. The contemporary man is himself an anonymous invisible biped caught in a web of anonymous and intangible constructs.

For the 21st century at least, invisibility is no longer a marginal circumstance, an intrinsic attribute of the periphery of perception. In the same manner, it no longer requires a series of invasive practices, but rather an imperceptible flow through which the self becomes trapped in a series of invisibilities that cancel out its aspiration for meaning and individuality. The modernist angst, the unfamiliar, the accidental no longer cause an epistemological reaction of a sensitive or cognitive nature within the viewer. The realist speculative vision from which the art show often claims it drew inspiration from implies an ontologically oriented object that does not need (anymore) the unfamiliar, in the formalist sense of the term, neither does it need the strange, nor the intrusive and disconcerting insertion of the accidental in order to uncover itself. Because in a reconstructive limbo of matter that is purified and sublimated by the fixated gaze of the visitor, the curator or the artist, there are no more avatars of reality to demolish. Beyond the modernist melodrama of tension between appearance and essence, the neutrality of the visible and the reification of the invisible constitutes a hegemonic and political response.

Reality, as it is intelligible for the 21st century, represents an enumerative entity which is horizontal and not layered into levels of significance. Man, snowdrop, squirrel, ecosystem, chair are all indivisible: visible or invisible. To defamiliarize them by conjuring their residual invisibilities no longer represents a contemporary stake. Later directions of the curatorial project could question more pressing issues: is this de-absolution of matter a new form of absolutist perception, is the irrational of existence a coordinate of our own cognitive limitation or is it a quality of the object?

“I am the invisible man” is the second part of the curatorial project in VI chapters, The white dot and the black cube by Anca Mihuleț and Diana Marincu.
Artists: Michele Bressan (RO), Andreea Ciobîcă (RO), Norbert Costin (RO/SE), Cătălin Ilie (RO/DE), Alex Mirutziu (RO)+ Pär Andersson (SE), Esra Oezen (DE), Cristian Rusu (RO)
The art show is at MNAC, The House of Parliament, 4th floor and can be visited between 19 February – 10 April 2016.

This is the winning text resulting from the writing workshop Critical Nature, organized by Revista ARTA together with MNAC between 21-27 February 2016.